Seven scorching stories – including two brand-new tales, “Breath of Angels” and “The Wedding and the Wolf” (featuring Patrick and Christina from Priceless)

100% of the proceeds will be donated to Feeding America

For sneak peeks, swoony pics, exclusive giveaways, and all the news, join my Facebook readers’ group,

Are you afraid of the dark, Christina? I don’t need the lights on to read you like a book.

The first time I meet the wolf’s cold eyes, we’re at a college party.

Maybe you like the dark more than you think.

I just quit the cheer squad. I’m about to dump my musician boyfriend. I’m partying harder than ever. I let money run through my fingers because I’m done reaching for standards I’ll never meet.

Soon, I’m broke. And I don’t want anyone to know.

The more you hide your true self, the more you’re going to let it out with me.

I’m bubbly and outgoing. He’s icy and alone. I stay away. I touch myself, thinking of him.

When I finally seek out Patrick Caruthers, he has a proposition.

I think you’re going to be the perfect playmate.

I’m not perfect. I’m not stunning or noble. I’m not a heroine.

You were made for me.

And he’s a cold bastard

Who is paying me for sex. 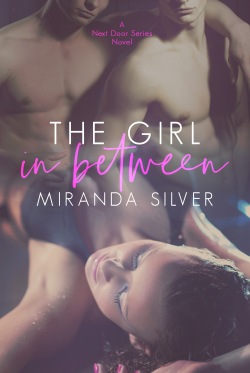 The Girl in Between (Next Door #2)

If you’d told Diana Cooper that “bad twin” Ian O’Brian would be her first lover — in his treehouse — she would have laughed in your face.

If you’d told her they’d start a relationship, she would have waved you away.

If you’d claimed he’d been secretly in love with her for years, she would have turned bright red.

But Di isn’t living in her imagination anymore, and she isn’t hiding in a shell of shyness. After years of burying herself in books, she’s done holding back.

Yet being with Ian brings its own set of secrets.

And when the bad twin starts to shed his reputation, where does that leave the good twin?

The Boys Next Door: An MFM Menage Romance (Next Door #1)

“Maybe I’m just pissed Brendan got here first,” Ian rasped in her ear. “Did you think about that? And either he’s been lying to me, or you’ve been lying to him. You know what to do with a boy.”

She was a good girl, she was a bad girl…who knew what the truth really was?

Brendan and Ian O’Brian, the hot twins next door, are home from UConn for the summer: muscled, athletic, basking in popularity. Brendan, the “good twin,” attracts everyone with easygoing friendliness. Ian, the “bad twin,” leaves a mess of pranks, collisions, girls, and attitude behind.

As kids, the twins were practically Diana’s brothers. But a year away changed everything. Now, Di can barely handle a hello to Brendan. And Ian — well, it’s easier to look the other way and pretend she doesn’t see his smirk.

Right before graduation, Brendan breaks the silence to invite Di for a swim. She figures she’ll test the waters, but the night that follows goes beyond her steamiest dreams. And it’s just the beginning.

Can she dive in and live out her fantasies? Can she let the past go and learn to trust? And when no one’s who they seem — good twin, bad twin, or shy honors student — will her heart tell a different story?

She’d never admit it. But she might be over her head.

Click here to sign up for my newsletter! New releases, updates, and a sneak peek at the Boys Next Door sequel…